I recently decided to build a cheap NAS box for my personal use as an on-site backup solution to complement my cloud storage on AWS/Github. I had a older spare machine collecting dust which seemed like it might be up to the task until I purchase a real NAS.

disclaimer: the commands documented herein are what I used to set up my NAS, using debian 9.8.0. these commands may break or destroy things if you already have a raid setup, or are running different software, or if something goes wrong. use at your own risk. most of these commands must be run as root.

Since they were available for cheap, the main system drive is a 120GB Kingston SSD

This case layout for this PC wasn’t very well thought out and the SATA power connectors and don’t line up nicely with the drives inside of the drive caddy. To fix this, I purchased some SATA power extenders which I’ll be installing when they arrive: Cable Matters 3-Pack 15 Pin SATA Power Extension Cable 12 Inches.

All these commands must be run as root. Either use sudo or login as root. The mdadm utility won’t even appear for non-root users on my machine. For this walkthrough, I used two blank drives, so you may need to erase them if you want this to work.

First, we install mdadm, which we will use to manage our RAID-1 setup.

Run lsblk to list all block devices. Mine were /dev/sdb and /dev/sdc because they were in sata ports 1,2, but yours may be different. The important information is the first column (the device names).

These commands tell you if there is an existing raid configuration set up.

Here, we need to partition the devices. For each of them, I created a full-disk primary parition, and set the type of each to linux raid (type fd).

We should see status information for the two blocks, and their partions.

Next, we create the raid device using mdadm --create Then, read current status of the array.

This command may take a little while depending on speed and drive size. It will format the entire device as ext4.

Mounting it for the first time

First, we create a mount point at /mnt/raid. Then, we mount /dev/md0 into it.

This appends the current mdadm configuration to the mdadm.conf file, so it will persist.

This command should show the status information and mount points. you should see a line that reads /dev/md0 /mnt/raid1.

I then created a readme to verify I could read/write to the disks successfully.

Note: this fails on newer distributions after a reboot.

First, I added the following contents to my /etc/fstab. This was the original entry I added per the instructions I was following:

Next, update the boot image to ensure all the required configuration files are up-to-date.

I run the following to test mount, which worked. I then waited for the initial sync of the disks to finish, and then rebooted when it was done.

When rebooting, I recieved the following error messages: 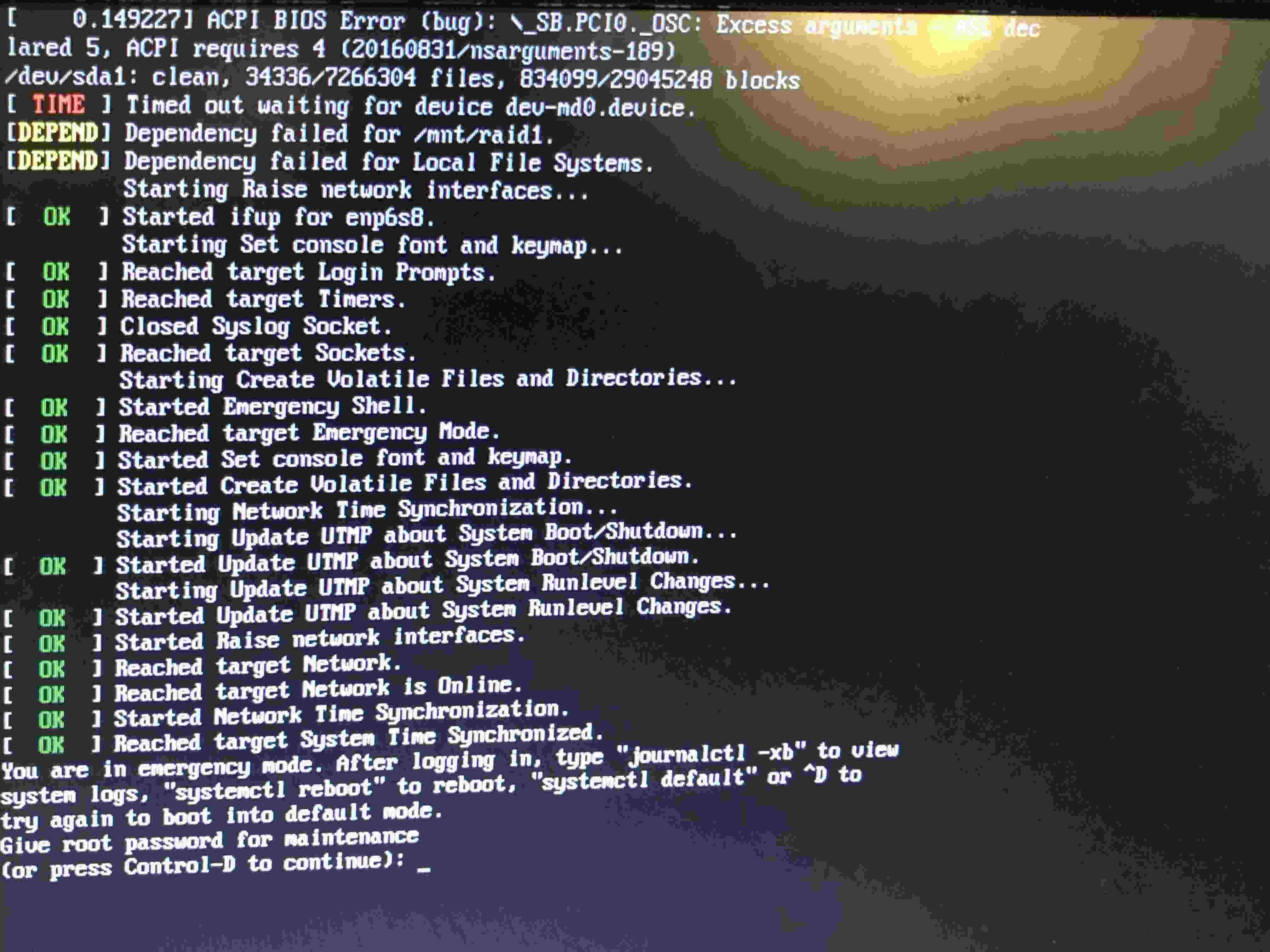 …and was promptly dropped into emergency mode. Not Good.

~As it turns out, on newer distributions the RAID array is referred to by it’s name, and ids are “randomly” assigned So, I had to modify my fstab entry to what was shown below. You should be able to find the proper name for yours by running ls /dev/md. I then modified the /etc/fstab entry as shown below, and rebooted:~

Note 2019-07-06 - this may be because my initramfs wasn’t updated with my configuration properly - the early boot process needs the config to properly assemble the arrays. See the section on RAID1 here. The initramfs should be updated after making config changes using sudo update-initramfs -u. I’ve added it above.

The RAID array now functions properly through reboots, and is auto-mounted on startup. lsblk now shows the disks and partitions, as well as their sizes. Both /dev/sdb and /dev/sdc should be mounted as raid1 on the same mountpoint, as shown below:

Once the drives finish syncing, they should read as “clean”

Next, I’ll be finishing laying out the cables and drives in the machine, and uploading pictures of the finished product! Stay tuned!

Since this is also going to serve as a media server, I want to be able to access media from various connected devices. Since apps like VLC supports SMB network shares, I set up a read-only public share of the contents of the media drive.

I added the following lines at the bottom of the /etc/samba/smb.conf config file to add shares for each type:

By default, smb configures printer shares. I commented out those lines in the config file, since I don’t need that enabled.